What did I tell you, baby? You hate me 'cause you ain't me!

Nick Smith is an original character created by Darkest Shadow.

Nicholas Jason Smith is an eighteen-year-old boy from Autumn Springs, Connecticut. He was one of the most popular kids at Autumn Springs High. Although he doesn't play any sports, he clicked with all the jocks and cheerleaders. He went to almost all of the big parties and likes to have fun with his friends.

Nick grew up in Connecticut with both of his parents. Five years later, he got a baby brother. The four of them lived happily together for a while, until 2011. His father caught his mother having an affair, and filed for divorce. He got sole custody of both of them.

In middle school, Nick grew up as a very lonely kid. He was very nerdy and tried to fit in with the popular group, but it just didn't work out. He was considered unattractive, and physically unathletic. He was constantly bullied and nobody really wanted to hang out with him. In this time, he didn't have many friends and played video games all day. He realized he was a loser and wanted to change that, so he started to work out and get in shape. The summer of 8th grade is when the odds turned in his favor. He gained popularity, lost his ugly features and the jocks accepted him.

His dramatic change caused him to have a bad attitude. In this time, he and his new friends would always bully a young boy named Louis. However, it got very boring and he started to realize that what he was doing was wrong, and wanted to change that. So after a while, even though he acted like he disliked him, he started to randomly invite himself to places with Louis and his friends. The group really disliked him in general and was very annoyed by his presence. They tried to avoid him as much as possible.

Freshman year came, and everything changed for him. He started making some bad choices, like drinking alcohol and smoking weed at parties. This just made Louis's friends hate Nick even more. However, in a few months, Nick realized that he generally liked hanging out with the group and they all saw it. So he apologized to Louis for the bullying and that he really liked all of them, so the group just accepted Nick into the group.

Nick is like a cartoon character, as he is a spontaneous figure and with him, nobody knows what's going to happen next. Playful and carefree, he does whatever he wants, whenever he wants. He's unpredictable and full of surprises; usually, they aren't the good kind of surprises though.

Nick is your typical average cool kid. Mean, bossy, and high-maintenance, Nick is always the first to judge a person. He doesn't really look at people for what is inside them, but for their external pleasures and benefits.

Like a typical jock, Nick's self-esteem is in a league above its own. Self-confident and sometimes conceited, Nick is very cocky and stubborn and likes to boast about how strong he is. He believes he can do whatever he wants if he really wants to do it and doesn't think of the aftershock of what could happen next.

Nick doesn't shut up. He loves talking just as much as he loves himself. He can go on for days about a small detail and always finds a way to add on to a discussion. Sometimes his peers just need a minute to tell him to relax as he is too hyper.

Nick also has a very strong sexual appetite. He lost his virginity early on in high school and is obsessed with women. Despite his strangeness, some women find his character charismatic. He isn't afraid to go up to a girl and ask her out on the spot, because for most of the time, they usually don't say no, either because they really like him or they're scared of what could happen if they do. 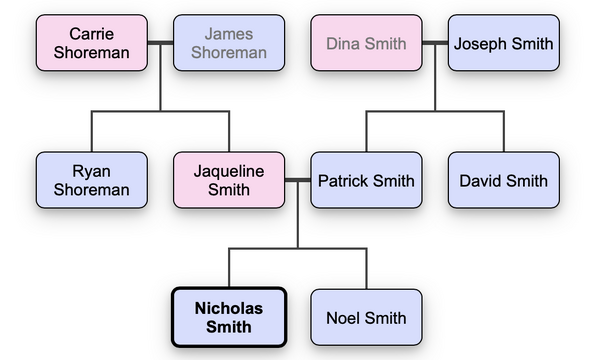 Nick's parents filed a divorce when he was 10. His father took custody of him and his brother, but his mother was allowed to take care of him up to twice a week. He loved both of his parents equally, but since he grew up mainly with his father, he has a closer bond with him. When he found out that Noel was adopted, he was more upset than his brother, and held a grudge against the both of them.

Nick loves his little brother almost as much as he loves himself. Noel tries his best to live up to Nick's self-proclaimed glory. Nick's lifestyle didn't impact Noel, so Nick helped him try to fit in and not make the same mistakes he made in middle school. People view Noel as a small version of Nick, and he loves that about him.

Nick had a total of 10 relationships. Out of those, he had sex with of eight out of the ten girls he dated.

Erica and Nick used to date for a brief time. In the past, neither of them could stand each other, but they were very close friends and were always talking. He always hangs out at her estate. Over Memorial Day Weekend, the gang went down to Rhode Island for the weekend to celebrate with some drinks, but while both Erica and Nick were very, very drunk, they got together on the first night. They both woke up in the same bed and decided to just go out, as neither of them were seeing anyone and they have a good chemistry already.

Erica ended things with Nick because she had to move on to the next chapter in her life, but she didn't want the chemistry to die. Nick asked if they could be friends with benefits, but she said she'd have to think about that.

Ever since Nick met Marmalade, he had a giant crush on her. She found her very attractive and tried several times to steal her from Louis. Marmalade was well aware of his crush, and even while she wasn't dating Louis, she rejected him several times.

Nick saw that Marmalade was damaged emotionally from her breakup with Louis, and she wanted to find new love. In January, Marmalade finally gave into Nick's pleading and had sex with him, which she very much enjoyed. The two started dating and are very much in love. Nick says that she always matched his energy, and that, in a way, keeps him humble.

Emma and Nick are good friends. Emma doesn't really talk to Nick as much as he talks to her. Often times, Nick would scare away the animals that Emma is seen around.

Gwen and Nick are friends most of the time. She views him as annoying, as often times he calls her "Goth Gwen", but she learned how to tolerate him.

Ryan and Nick are also good friends. Ryan does view him as annoying, but like Gwen, he learned how to deal with it.

Zack and Nick are good friends. The two are usually invited to the same parties, and have a similar inner party animal.

Lyra didn't really like Nick until she started dating his little brother. After that, the two became better friends.

Retrieved from "https://darkestshadow.fandom.com/wiki/Nick_Smith?oldid=5404"
Community content is available under CC-BY-SA unless otherwise noted.